It’s been a while since I last posted with some exciting book news. Not because I’ve been lying pool-side drinking Pina Coladas – far from it! I have been hugely busy on a new writing project and the time has come to lift off the covers and show what I’ve been up to.

I’ve partnered up with fellow Kiwi author David Hair, and Canelo Publishing (UK), to produce THE OLYMPUS SERIES. The first book, ATHENA’S CHAMPION, will be released on November 8th. We’re contracted for three books, but we’ve several more planned after that. 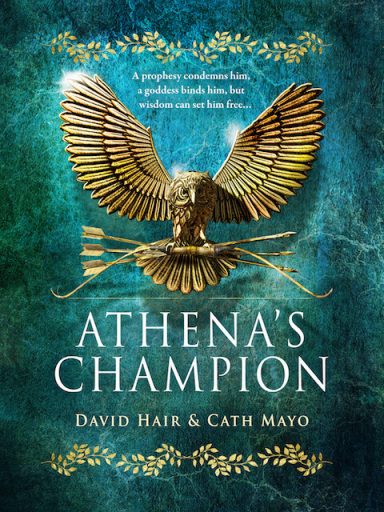 So what’s the series about? As with my two YA novels, Murder at Mykenai and The Bow, it’s our take on those Greek myths that form a prequel to the Trojan War. This time, the books are adult fantasy novels but once again, they are full of action and adventure, with a strong historical grounding, lively characters and a goodly dose of humour. And ODYSSEUS is back as our chief protagonist, a little older, a little wiser but faced with plenty of challenges, some of them of his own making…

David and I believe we’ve come up with a unique approach to the Greek myths. To date, Trojan War books have largely fallen into two camps – (1) the gods are majestic super-beings with human personas, squabbling petulantly and behaving with what seems to be bewildering inconsistency, one moment benevolent, the next cruel, and with humankind utterly dependent on their goodwill; or (2) religion is reduced to shamanistic quackery and we get the gritty human war story.

Our series takes a third approach, one we’re not aware of anyone using in this mythos before. While the context is a War of the Gods that will shape the future of mankind, we have given it a major twist. No spoilers, but we’re presenting a whole new take on this timeless, classic story. If you want to know more… read the books!

We can reveal, though, that our hero Odysseus fights for reason in an age of superstition. He is a man ahead of his time, a rationalist applying logic and cunning to further his cause: the preservation of his homeland and the freeing of the human spirit.

These three books encompass some of the great tales of Greek mythology, all seamlessly delivered as a continual story – myths like the First Abduction of Helen (by the Minotaur-slayer Theseus – look it up!); the Judgement of Paris; the wars of the Seven and the Epigoni against Thebes; the Wedding of Helen and the oath of Tyndareus, all vital stages in the fermenting of the Trojan War.

They also gives us a chance to portray some of the great heroes of the pre-Trojan War period – Theseus and Heracles, as well as Odysseus, Diomedes, Hector and Paris; some of the powerful rulers of the period such as Agamemnon and Priam; potent figures of prophecy and magic like Cassandra, Tiresias, Helen and the mysterious Pythia of Delphi; gods and goddesses like Athena, Zeus and Aphrodite; and cameos by other deities and heroes of the past.

With reader support, our hope is that we will then go on to give you our unique interpretation of the Iliad (The Trojan War) and the Odyssey (Odysseus’s journey home). It’s going to be fast-moving, full of incident, adventure and magic; but also true to the mythology and the known historical context of the Aegean Bronze Age. It will be a series to satisfy both fantasy fans seeking adventure, and classical and ancient Greece enthusiasts seeking a new take on the familiar.

David and I are both very excited by this series. Working with another writer has been a blast – more on that later. Telling the tale through Odysseus’s eyes, as a first-person narration, has been hugely refreshing, and fitting together the jigsaw puzzle of the interlocking myths into a linear storyline has been a creative explosion. 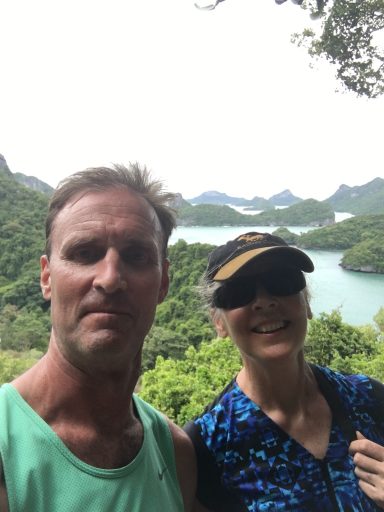 David and Cath hard at work on the new book, somewhere in Thailand

ATHENA’S CHAMPION is already available for pre-order through Canelo’s website: https://www.canelo.co/books/athenas-champion/. I’ll be posting the first two pages of ATHENA’S CHAMPION as a taster on my own website shortly – I’ll keep you posted on that! The books will be primarily published as ebooks, but there will also be a print-on-demand option.