The dagger which Odysseus shows his weapons training group, in Chapter 8 of Murder at Mykenai, is very similar to a real dagger which was probably found on Ithaka and dates from Odysseus’s time. The original weapon is in the British Museum. Here it is:

This dagger, in the British Museum, was probably found on Ithaca and is dated from the time of Odysseus

Finding out about this dagger was one of the more exciting research adventures I experienced while writing the book. Years ago I was trawling the internet, looking for Greek Bronze Age weapons, when I found a replica Bronze Age sword blank on an armoury site. I printed the page out, filed it and forgot about it. 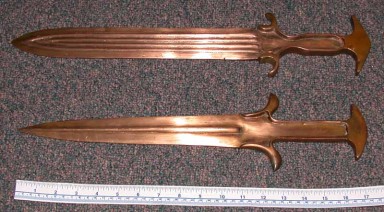 When I wrote Chapter 8, I wanted a prototype for the dagger Odysseus had made, and I found the printout amongst a pile of other stuff and decided to use it, even though it was a sword, not a dagger. More years went by, and it was only when Murder had already gone off to the printers that I went looking for the original armoury site, Albion, hoping for a good-quality image for my website. This is what they sent me (the sword I copied is the one on the top).

They no longer make the sword, but more trawling led me to a blog written by someone who had bought the blank and – just as Odysseus had done – finished the blade, 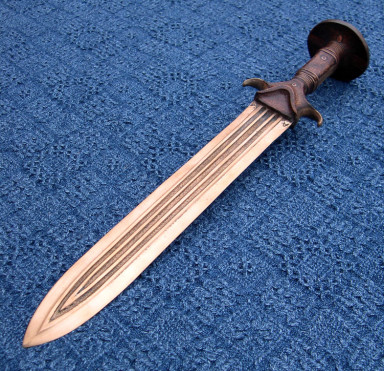 and built a hilt and pommel for it. 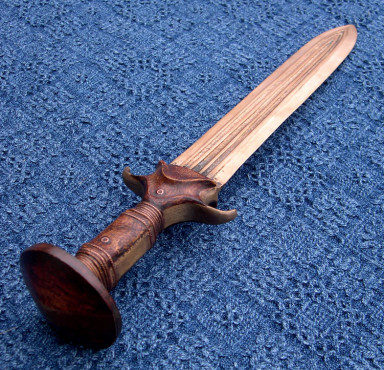 I was staggered to find out that the original prototype for the sword was actually a dagger – Albion had lengthened it – and that I could find the real one in the British Museum. Here’s a picture of the dagger again, in real life and as a drawing, the rough casting opf the Albion sword, and the finished sword. 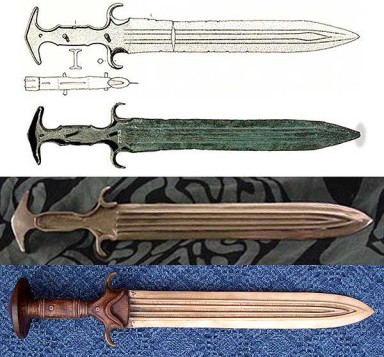 So the dagger I invented was an actual dagger after all. Maybe it  really was Odysseus’s dagger! How scary is that?

Then the most amazing thing of all happened – the blogger decided to sell the sword. I bought it and it now lives beside my computer, in case I need inspiration while writing a battle scene.