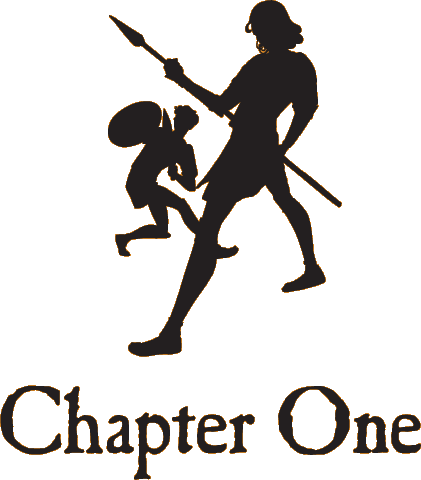 This had to be the strangest thing he’d ever seen. Odysseus stared at it, caught between laughter and amazement, and it glared right back, its tiny head swaying snake-wise at the end of a long, scrawny neck. Two huge bony legs on massive feet supported a body the size of a donkey covered in a sprawl of ragged feathers.

“What a wicked expression it has, Eury,” he whispered to his companion, a dark-skinned, black- haired youth a few months short of twenty, and a full head and shoulders taller than himself. “Worse than that old man’s after I stole his pears.”

“Oh. So you did steal those pears,” said Eurybates.

“Of course.” Odysseus stretched his eyes wide.
“What did you think?”

Eurybates shrugged and smiled. “I won’t tell your father,” he said.

They gazed about them. It seemed half of Mykenai had crowded into the steep road leading up to the palace, craning, shouting, chattering, shrieking and waving as the procession passed by. A tightly bodiced woman squeezed onto the step above them, tiny beads of sweat glistening on her white-painted face; a hunched old man elbowed forwards on their right, his small, sour mouth almost hidden in the folds of his cheeks; across the street a young courtier languished, ornate, perfumed and cradling a wriggling puppy in his arms.

The ostrich caught sight of the puppy. Its head swerved, and froze as the puppy started to bark. The courtier turned, laughing to his neighbour and the bird struck, its great clawed foot lashing up, out and down. The puppy scrabbled out of the young man’s grip and pelted off down the cobbled road as the man swayed and crumpled, his reddening hands clutching his face, blood streaking down his chest and through the tassels of his kilt.

The crowd heaved and surged as panic broke out. The ostrich bolted, dragging its struggling keeper in its wake, and crashed into a mule loaded with two massive clay jars. The mule reared and the ostrich lashed out                 again, its claws slitting the leather harness like thin linen.

A jar shattered as it crashed to the ground, disgorging a torrent of stone bowls, scarabs, spices, glass beads and gold. The keeper lunged at the bird’s tail feathers, stepped on the beads and landed flat on his face. The other jar ricocheted down the steps, scattering bystanders, dogs and soldiers in all directions.

Up ahead a gilded sedan chair blocked the road. The bearers dropped the chair with a thud and fled as the ostrich charged towards them, hissing furiously. It galloped over the chair’s struggling occupant, snapping support poles, ripping awnings and scattering feathers in its wake before vanishing up the hill.

At last chaos untangled into order. The young man was carried away, the debris was cleared, the remnants of the procession continued on and the crowd, straightening their clothes and their shoulders, set off after it in the hope of fresh disaster.

“Ha. That was more than we’d bargained for,” said Eurybates.

He peered around him, a sick taste in his mouth.
“Olli?” he called. “Olli. Odysseus!”

Worry turned to anger. “Irresponsible little wretch,” he swore under his breath. “Vanishing again – in Mykenai of all places. Laertes will flay the hide off me.”

He stared around again. To his right a tangle of whitewashed buildings stretched back towards the great gate. In front of him the hill reared up, capped by the smooth walls of the palace. To his left the road curved round, hugging the citadel wall on its way to yet another maze of buildings.

His royal charge could be anywhere.